Here's How Americans Plan to Spend Their Tax Refunds This Year

Though getting a tax refund is arguably a negative thing, as it means you overpaid your taxes during the year, the fact of the matter is that most people look forward to collecting that money. In 2017, 80% of taxpayers received a refund, and at an average of $2,782 per filer, it's clearly, not a small amount. The extent to which this year's average refund compares to that number is yet to be determined, but one thing we do know is that Americans are already making plans for how they'll spend that money.

Here's where all of that refund cash will go, according to a newly released TaxSlayer survey:

You'll notice that the total to the right exceeds 100%, and that's because some tax filers plan to do more than one thing with their refunds. For example, some might intend to use their money to both pay down debt and purchase a luxury item. But while socking money away for a rainy day, building a nest egg, and eliminating debt are responsible uses for a tax refund, most Americans can't afford to be indulging in electronics or vacations. And those are the exact same people who stand to lose out year after year by getting refunds in the first place. 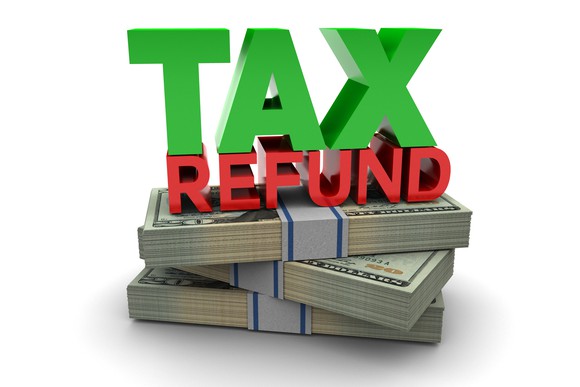 It's not free money

One major misconception about tax refunds is that they constitute some form of bonus cash -- kind of like walking down the street and finding a stray $100 bill. But what you need to understand about getting a tax refund is that that money was always yours to begin with -- you just chose to let the government hang onto it longer.

The problem with viewing your refund as found money is that you may be inclined to follow in the footsteps of those who intend to treat themselves with that cash rather than use it more sensibly. For example, the majority of Americans are currently woefully behind on savings. An estimated 57% of U.S. adults have less than $1,000 in the bank, while 39% have no savings at all. Since we all need a minimum of three months' worth of living expenses socked away to protect ourselves from emergencies, it stands to reason that building that safety net should be most folks' No. 1 priority. The fact that 43% of would-be refund recipients plan to stick their cash in savings is a positive sign -- but it also means that most of those folks probably lost out by not having access to that money all along.

Let's look at the 42% of refund recipients who think they'll use the money to pay down debt. You can't help but wonder whether not having that money sooner contributed to that debt in the first place. We just established that most Americans have inadequate savings, so if you were one of them and incurred an unplanned expense during the year, you probably had no choice but to charge it on a credit card and rack up a balance in the process. But had you had, say, an extra $231 per month -- the average 2017 refund divided by 12 -- upfront, you might've avoided that debt altogether.

All of this boils down to one overarching point: Getting a refund is hardly something to celebrate, even if your brain tells you otherwise. If you are getting a refund this year, use it wisely.

Establish a safety net so that the next time an unanticipated expense comes your way, you'll have money to tap in order to cover it. Get rid of the debt you incurred so you're not throwing away (more) money on interest. And if you're doing well from a savings and debt perspective -- meaning you have plenty of the former and none of the latter -- consider putting your refund into an IRA or 401(k) if you're not currently maxing out.

Of course, if you're already well-covered in all of these areas and are due a refund, then by all means, indulge in a new TV or dream vacation. But going forward, you should still take steps to get more of your money upfront and less cash in the form of a refund. That way, you can enjoy those luxuries when you want to, as opposed to waiting on a check from the IRS.

This article was written by Maurie Backman from The Motley Fool and was legally licensed through the NewsCred publisher network. Please direct all licensing questions to legal@newscred.com.